It was one of those work days.

The kind that leaves you depleted physically and mentally.

The second to last turn made, less than five minutes before the end of one portion of the day and home to the next, but there I sat. The school bus and its flashing lights standing in the way of home.

Quickly calculating alternative routes and realizing none, I stewed.

This would set me back. Ten minutes now lost when I could be multitasking-prepping meals, answering work emails, trying hard to maintain eye contact with little girls sharing stories.

It was then that he appeared, the little boy, lunchbox in hand, backpack slung over the shoulders, bounding off the bus and up the drive.

A few seconds later another stop, two little girls hopping off, running up the grassy slope.

The front door to the farmhouse opens. A little sister dances out. I didn’t need the car windows down to hear the squeals, the delight as playmates returned home.

Watching and waiting, my frustration whittling away to nothing.

I hadn’t realized the working women needed a pause, a moment to transition to Momma.

Someone else had and now the moments sitting behind the bus were preparing me for the moments yet to come.

Car in garage, ignition turned off, I was ready for home. 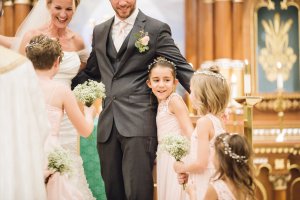 This year has been a joy. I’ve enjoyed every second, learning about who you are, what makes you tick.

The learning isn’t over. We get to spend the rest of our lives figuring each other out. 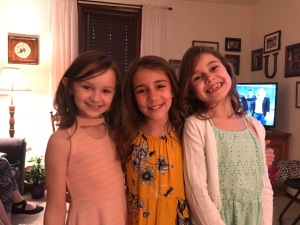 What I have discovered is that you are one hardworking, young woman.

Your dedication to schoolwork is incredible.

You have boundless energy. How do you manage to spend hours jumping on the trampoline after school and never get tired?

You’re motivated to try new things and you have a bit of wanderlust. I can’t wait to share that with you. There are places I want you to see and places I want us to discover as a family.

I love how you always offer to do Zoey’s hair in the morning,

the way you appreciate order,

how you put up with my stories,

and your newfound love of Kevin Henkes books.

But mostly I just love having this front row seat, watching you grow.

Thanks for hanging out with me this year, for putting up with me through all the transitions of the last 12 months and for making your daddy who he is today. No doubt Syd, you as the first-born played a special part in making him the man he is.

I love you so much.

I look forward to your new year.

P.S. of course you get your own birthday song. I promise I’m not going anywhere. Just hold on, this is home.

An engagement, a wedding, two homes sold and one purchased, a year come and gone since that evening.

A good Friday service, then to a local bar for dinner and music, and twelve months later we sleep with our six girls under one roof,

nearly six months into our marriage.

On that night if you were to have told me where we would be today, I would have believed you.

It wasn’t just that evening of laughter and good conversation that led me to know he was the one.

Four years of work lead up to that date.

Relationships with others that helped me to learn.

Lord, I give up. I place this in your hands.

When it was time, Matthew arrived.

Finally unencumbered by the “stuff” that weighs one down, we only needed the minutes alone together to know this was the start of the grandest adventure.

Many a night now I fall asleep mid prayer.  He and I whispering words while children sleep in rooms above.

Matthew says I take a deep breath and he knows then he has lost me to slumber. On those nights he finishes the prayers for both of us.

A broken women’s prayers all those years ago, answered now in the form of a man who speaks her prayers when she cannot.