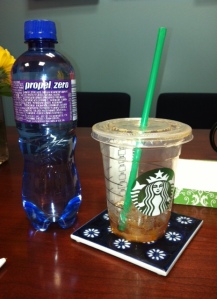 That picture above pretty much sums up the week. Loads of tall iced coffees (one Splenda) and a lot of propel water (to counteract the caffeine and keep me hydrated).

The week started out with a trip with the two big girls and my mom to see The Lion King in Cleveland.

And then there was some one on one time with Sid at her riding lessons. She jumped quite a bit this week.  To say I was nervous would be an understatement but I guess this is what parenting an almost 9 year old is all about. Allowing her freedom to do what she loves and being scared sh*tless as she does it. I love this picture of her in the car on the ride home from lessons. Yep, loving the feeling of her head out the window on a winding country road. Freedom.

This is what parenting a 2 1/2 year old is like. First big girl haircut (goodbye curls). Bribing her with lollipops to sit in the chair while the stylists cuts her hair with lightening speed (anyone with a child that age knows how hard it is to keep them still for long). 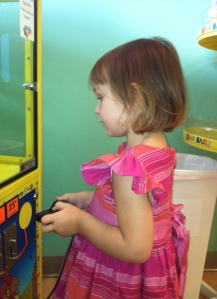 A week full of precious moments.

Here are a few other things that have spoken to me this week:

What I am reading:

Finished this one during my air travels. I love the weight of a book in my hands.

Speaking of freedom and children this blog post spoke to me:

What I am listening to this week:

The family and I have been pretty busy these last 4 days and I can’t wait to share all the details.

But for now it’s more cherry pie and maybe a margarita or two before this birthday girl heads to bed.

This is how I started my week. 6:45am on monday morning as I pull out of my driveway and head to work. I had to stop the car to snap a picture.

Cannot wait until we head to Jekyll Island in August. Brock bought this mug on one of our first trips down to the Golden Isles. He has his coffee in it every morning. Think he needs a new one?

We’ve had some pretty major storms over the last week. In the early morning hours of Wednesday two little visitors crawled into our bed after a particularly vicious storm went through. This is how things looked in our room at 6:30am (note the very wet and scared dog that also decided to jump into our bed).

Who knew someone could be so excited to install new mats in a truck? And yes those mats were a present for his 36th birthday. Wow are we old or what?

Ellie is very helpful when I try to procrastinate. I didn’t feel like running so instead of helping a mama out by taking a few pictures with her she announced “Mama I don’t have time for pictures”. 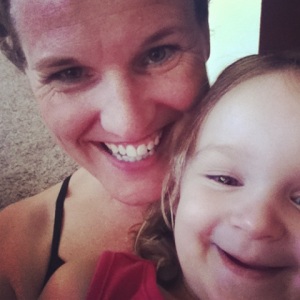 The storms finally stopped and we were able to get out last night to do some flower picking and roast marshmallows over the fire pit.

Audrey had her final day of gymnastics camp today so of course we had to take her out to lunch to celebrate.

Looking forward to this week. Brock is taking Sid out on the boat for some late night catfishing.

Tomorrow we have a wedding for one of Brock’s coworkers which translates into loads and loads of time minus children for the two of us.

Sunday will be spent “fish shopping”. We promised Ellie she could get a fish when she was potty trained and wouldn’t you know the little girl made up her mind this week that she no longer wanted to wear diapers. Just like that and after 8 years we are now a diaper free house. That girl deserves a fish!

One final thing. Check out the following. Nail on head. I don’t know why I feel the need to justify why I watch this show but here’s a few reasons.

I cram in moments to write.

Stuck between a doctors appointment and a conference call I have time to fill, so I run to a coffee shop to sip my black coffee and let the words that have been sitting with me spill on to the paper.

I’ve been visiting coffee shops long since before it was cool.

My first trip I can recall was at 18 to the Starbucks in a strip mall across from the movie theaters in Monroeville, Pennsylvania with my dad. Probably circa 1995.

His drink of choice was a tall coffee black, mine was a Carmel Macchiato.

We sat in the tall chairs at a long black table.

He asked me about college, my hopes and dreams. He always quizzed me.

“What about major’s Heather? Have you landed on one? Any boyfriend’s? Have you thought about summer internships?”

Some teenagers would bristle at the rapid fire questions ( it was hard to keep up with my dad’s train of thought-he was on to the next question before you had time to digest the first), but I loved the attention. In that moment, with coffee in hand, my father completely focused on me, I felt so grown up.

Just 12 years later I would be sitting at another coffee shop on the south side of the city. Another Carmel Macchiato in hand (a younger me really had a thing for sugary coffee drinks) while my dad and I talked with my daughter Sidney. Sid was transfixed at the site of a man walking his parrot. “How is preschool Sid? Do you want to go see the horses at the park? How about Round Hill farm? Would you like to go there later?”.

He peppered her with age appropriate questions while she remained focused on the site of the brightly colored bird now sitting on the railing waiting for his owner to return with his cup of coffee.

I, a three-year old Sidney and a 9 month old Audrey where visiting my parents. I had stolen away from work for 2 days and left Brock back in Columbus to tend to his work and dogs. The visit was prompted by a phone call in which my dad told me he would need open heart surgery in October but not to worry it was all under control. The best doctor, the best hospital would all be treating him.

So we sat, admiring the parrot and trading questions. Mine focused on his surgery. Being completely uneducated when it came to healthcare matters and honestly sheltered from pain brought on by a loved ones health crisis, my questions did not have the proper weight behind them. I did not recognize the enormity of the situation. Over the next hour, he continued to shift talk away from him and back to myself and my daughters.

That would be our last coffee date but his presence would loom large at my coffee breaks over the next month.

There was the coffee from the cafeteria the day of his surgery when the doctors delivered the news that it was successful and without it they had determined he would have died from a heart attack in the very near future.

Ah the joy in that cup of coffee as we savored the moment where this giant of a surgeon told us he had in essence given us our dad back.

Then there was the drive through coffee in the car from Columbus to Pittsburgh less than 7 days later when a frantic call from my mother told us my dad had taken a turn and was now in a medically induced coma in the ICU. Brock and I talking over our cups of expensive brew, trading thoughts on next steps.

There was the coffee with my dad’s old colleague and friend who came to pray with us the day they cracked open my dad’s chest for a second time.

Heads bowed, styrofoam cups of waiting room coffee in hands. Fingers burning from the heat, tongue searing from the taste. In that moment feeling alive and connected not numb and alone as I had moments before.

More cups of waiting room coffee then I could count over the next week as the infection brought on by the hospital and the giant of a surgeon raged through my dad’s body.

His smile, his laugh, sitting with me at all of those coffee trips.

Rapid fire questions from me to my husband, my brothers, my mom as the moments of waiting turned into days.

And then silence in the early morning hours of October 23 as he slipped from our grasp.

It took me 5 years after his passing before I could have another Carmel Macchiato.  On my birthday last year I  made it a goal to have one.

My dad had always forgotten the date of my birth. His father was born on the 19th of July and his sisters on the 17th of that same month. Over the years as he filled out forms for me (athletic waivers, permission slips, bank accounts), he would always pause and ask me “Remind me, were you born on the 17th or 19th?”. Momentary anger on my part before I would respond “No dad remember my birthday is the 18th of July.”

As the clock marked the hour I entered the world 35 years prior I sat alone in my car drinking the full fat concoction.

The foam on my lips,

The Carmel on my tongue,

The tears on my cheeks I long thought had dried up.