She found it in the hallway desk upstairs and wandered into my bathroom inquiring what it was.

The juice was gone. I told her the old iPod Touch in its  bright pink case needed energy.

She bugged me until I plugged it in.

Hours later she asked if it was charged .

Friends over, kids running around, lunches for monday to be made; I had a million excuses not to bother with it right then. Yet there I sat with her on the couch, one ear bud in her’s and one in mine and we watched the screen light up.

She giggled over the sight of her own name and in that split second I prayed I could hold it together.

The playlist made by a husband for his wife on the day she was to give birth to their third baby girl. 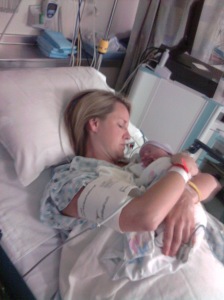 That baby girl, now almost five, wanting to understand it; to listen to the songs with her momma and talk about what each one meant and how they were “written just for her”.

Van Morrison’s Into The Mystic

Pink’s Glitter in the Air

On and on it played winding one to the next,

thirty pieces of history in all.

And as we listened to the last notes, the final strains of the love story sung

there were no tears,

just peace over all that was and now is.